I've been thinking a lot lately about the role of a mom, and the power of that role. The really deep thinking about mom power started about a month ago in Kohl's. I was looking around in the bedding section and overheard a conversation between a young woman, her child, and her mom who was riding around in one of those wheelchair-shopping-cart contraptions. Actually, I'm not sure if I could really call this interchange a "conversation", because it was more like a grumpy disabled grandma insulting her daughter and grandchild relentlessly. It's rare you get to witness this type of family dysfunction on your lunch hour- but I did. It started when the younger woman walked away from grandma and the child to look at some large framed paintings. I was just a few yards away and heard the grandmother fussing at the child. She was saying things like "Stay over here! Don't you dare walk away from me! What are you? Stupid?" And when I heard the last remark, I just turned and glared at her. The little boy was probably six or seven, and he was just doing what normal little boys do. He was touching the edges of pillows, running his finger along the wall, picking up random objects to look at them. He was as quiet as a mouse, and really not more than a few feet from grumpy granny at the time of her reprimanding. He came and stood a little closer to the wheelchair, and she continued on her tirade: "I knew if we came here, your mother would go off and find some crap she doesn't need to buy! Why are we wasting our time here? I didn't want to come in this store anyway! You don't need anything else for your house, it couldn't get any more cluttered!" Then she spoke to the child again, her words ice cold: " Don't even think of asking to go look at the toys! We did not come in here to look at toys! You have everything a child wants anyway! You need nothing else!" It was hard for me not to turn toward the ice queen and blurt out: "No, he doesn't have everything he needs. He needs you to be kind to him and stop humiliating him." But I kept my cool. I started to walk away when I heard the young mother start back-talking granny. She was as cold and sarcastic, but also worn down like she didn't care what verbal abuse her son had to witness. It was really very ugly.
It makes me sad to overhear or see a scene like this one. I just finished reading an awesome book called "Like Family" by Paula McClain. It is a memoir of her experience growing up in foster care, the middle child of three sisters who were abandoned by both parents, and spent their childhood and teen years living in different people's homes with different rules, different levels of dysfunction and so forth. This is a fabulous read (took me three nights to finish) and I laughed and cried, laughed and cried, through the whole thing. I read over one hundred pages the night I picked it up at the library, and woke up John several times giggling because of several funny stories and references to the pop culture of the early eighties when these sisters were growing up. But the reason I mention this book as part of this blog is because the girls in this book experienced all different types of moms. They had an absent mom, a stone-cold mom, a Nazi mom with endless rules, a permissive mom with no rules, a "wonderful" mom who was typical in every way, but eventually gave them back to the system (that was painful to read about.) They also had an abusive mom in foster-care, and yet with all of these moms, they yearned for a closer relationship, the bond they wanted to have so badly. You can feel the ache in the words of the writer, how as a little girl she longed for one of those "mom" figures to claim her, protect her, be affectionate to her, care for her when she was sick, and love her. Isn't this a basic human need? Don't we all want to have a mother care for us.
I am one of the lucky ones, actually, I am among the "more than lucky." I have a mother and a father that I would not change for anything. I am so blessed to have grown up in a home with two pretty normal people, who are still married today, and who were committed to not just each other, but to me, Emily, and Becky in every way. Today I am a well-rounded person with my father's sense of humor and work ethics, my mom's compassion and hospitality, and thirty-four years of wonderful memories because of two amazing parents. And there is not a sum high enough to convince me to call someone else my "mom" or "dad." I esteem NO ONE . . . not even among my relatives, the high honor of being labeled my mom and dad. Those titles are distinct and will not be given to anyone else in my life. But I know it's because of how blessed I was as a child (and still am today) that I didn't need a tribe of men and women to raise me. I had the best. 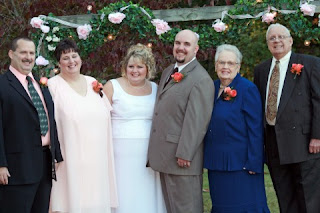 Mom and Dad are powerful people. They have powerful roles, their words are powerful and their actions will shape the foundation and future of the children they raise.
Just like grumpy granny in Kohl's (who is lucky I didn't roll her into the men's restroom) . . . words are powerful and mom's words are among the most powerful.
May God give me the words to speak to my precious stepchildren, my godchildren, and those children who "wait" for our family. May I watch my words, being ever mindful of the power they contain. May I always remember that when I hold my children I hold their future, their hearts, their tender minds, and their personalities.
Somewhere in the world today (maybe the state of Georgia, maybe elsewhere) are the children who will join our family through adoption. I pray that any damage or pain from the past will be comforted and eased when they are brought into our family for good. I pray that I will have the words to say that will encourage them and heal them, and make them always proud and happy to say "that lady is my mom."
Posted by Melissa Line at 12:22 PM No comments: