The Christmas of the Blue Sweatpants

Today is Mitchell Line’s 16th birthday. I am officially not ready for this. It is customary in our family to let the kids decide what to have for dinner on their birthdays, and true to form, Mitchell has chosen an especially unique selection for our menu tonight. Keep in mind, nothing (well, almost nothing) is off limits. Mitchell could have chosen steak, shrimp, or any restaurant that works for a crowd as large as our family, but instead he chose this: Frito Pie (with John’s homemade chili), Buttermilk Cornbread, and Bacon. For dessert there will be no decorated cake with frosting and candles, and not even a bakery cheesecake as we have had in the past. This year, it’s just leftover pumpkin pie from Thanksgiving, and were under strict instructions NOT to put a candle anywhere near that . . .  birthday pie.
And this is really what he wants. Just like the other day when I asked him what he wanted for his birthday and he replied, “Mason jars and animal fat . . .” and just before I burst into laughter, he added, “and some really good string.”
He just wouldn’t be Mitchell if he wasn’t working on a plan. Right now, it’s the end of the world, which he insists is coming sooner than we all anticipated. There is somewhere behind our house a deep, underground bunker with supplies and canned food. He has a “bug out” bag under the futon in his bedroom, complete with assorted tools, survival guides, various weapons, and God only knows what else. I really do love Mitchell. Ours is not a love that came instantly, but that grew over time. Now at sixteen, considerably taller than me, and with a voice almost as deep as his dad’s, I consider Mitchell to be among my favorite people in the world. He is funny, thoughtful, insightful, and interesting in the way most people would look right past. But our relationship wasn’t always so easy. And so in honor of this milestone birthday, I want to travel back eight years and tell the story of our first Christmas together – and a moment in time that is forever etched in my memory. And so I give you . . . The Christmas of the Blue Sweatpants.

When I married John, Samuel was eight, Mitchell was nine, and was thirteen. If you think the concept of “Instant Mom” is cute and funny, think again. I was outnumbered, and in Mitchell’s eyes I was like a freak from another planet. We butted heads on everything from table manners to personal hygiene and everything in between. Our favorite topic to fight about was fashion, of which Mitchell had zero interest. His wardrobe consisted of loose sweatpants, very large T-shirts, open jackets, stained socks and the floppiest, lightest-weight sneakers you could find. Cheap? Yes. Easy to Maintain? Yes. Stylish? No. Mitchell was overweight and had no interest in toning up or dressing better to suit his physique. He was genuinely comfortable in dirty clothes, or clothing that looked like it came out of the reject pile at a thrift store. Mitchell’s autism made it hard for him to wear things that rubbed his skin or felt too tight. It was just too constricting for him. A wonderful Saturday for Mitchell was spreading out across the floor with legs in the air, no shoes or socks, watching Scooby Do reruns and passing gas. It was not unusual for him to have a hole in the crotch of his sweatpants and absolutely no concern whatsoever about it. And as the new sheriff in town, I suppose I came in just a little bit too strong. I brought home polo shirts, jeans, and new t-shirts in the correct size. These items were often thrown at me, or put directly into the kitchen trash. would chuckle and tell me there was no use. Mitchell was Mitchell. There was no amount of coercion or persuasion that could change him. But I tried.

When John and I got engaged, I spent more time worrying about what the boys would wear than what I would wear on my wedding day. I combed the racks of every department store and even offered bribes. Samuel was pretty accommodating. He was willing to wear whatever as long as he could take it off after the wedding. I finally settled on khaki pants and nice matching sweaters for the boys. It was a casual, outdoor wedding, so we made it work. But if not for promising Mitchell the chocolate camera off of the groom’s cake, there would be no such sweater-wearing on my wedding day. That was in October. In December, Mitchell had long-tired of my constant nagging and demanding that he bathe for longer than ten seconds, wear socks for only one day at a time, and refrain from throwing green beans to the dogs during dinner. We had an almost daily battle, and Mitchell would run from me and hide in the laundry room while Samuel would howl like a monkey that we were “fighting.”

Day by day, bit by bit, dirty Lego by dirty Lego, we made our way toward Christmas. And I planned what I believed would be a perfect Christmas card. John and I, together with , Mitchell, and Samuel, would be photographed in our coordinating outfits for a Christmas card that would grace refrigerators all across the country. I bought the girls matching blue sweaters and planned black for myself and red for John. To bring together the entire color scheme, I bought striped polo shirts and matching jeans for the boys. The shirts were black, red, and blue striped. I imagined how great we would all look together. John took one look at those outfits laid across our bed and laughed out loud. “Good luck getting Mitchell to wear that!” he laughed. I remembered the chocolate camera victory and scoffed at his remark. “Just watch,” I told him, “It’s gonna be fine.”

The photo session was to happen on Thanksgiving at my grandmother’s house in her scenic backyard with my mom as photographer. I told the boys that the outfits were just for Thanksgiving and they didn’t ever have to wear them again (although it would be great if they did!) Samuel took his new pants and shirt without a fight, and Mitchell uttered only four words: “Not gonna wear it,” and stomped off for another rerun of Scooby.

But, ha ha! I thought, this is only round one. I called Mitchell back to my bedroom, to reason with him, to explain that this was a soft shirt, and these were jeans with elastic! He would have none of it. “Not. Gonna. Wear. It.” He said with a look of defiance, and then a goofy smile. John smirked in the corner.

I did not relent. I did not go quietly into that good night. Thanksgiving fast approaching, I offered Mitchell the customary sweatpants and t-shirt for the entire day, if only he would change into the jeans and polo shirt for the family photo.

Round three: “Mitchell, if you wear this outfit, for just five minutes for a family photo, I will take you to the store and let you have a king size Reese’s peanut butter cup!”

Round four: “I will give you twenty dollars cash. TWENTY DOLLARS and the Reese’s peanut butter cup.”

Round five: “Mitchell, how about a nice new Lego construction set? And twenty dollars cash? And your favorite candy.”

This time, he pushed his pudgy little face as close as possible to mine without touching. “How many times I gotta tell you? I’m not gonna wear it.”

A weaker woman would have backed down at this point. But instead, I told Mitchell that there was no way around it. He could wear whatever he chose for Thanksgiving dinner, but he was changing for the photo. Thanksgiving Day came and we all traveled to . When it seemed like a good time to take the picture, I rounded up the boys and gave them their outfits. Samuel went upstairs to change without argument, and Mitchell ran from me. He literally ran from me, up the stairs and down the long hallway on the second floor. And I chased him.

He was laughing at first, and so was John who watched from the stairs. He laughed until I caught him, put my arms around his rotund little belly and used my best grown-up bossy voice. “Just put this on for a quick photo and then change back into your sweatpants. This isn't funny anymore.” Mitchell wiggled free and ran back down the hallway, with me in hot pursuit. John caught him at the landing. Clearly, he was ready to get it over with. In his stern, Daddy-is-mad voice, he tossed the jeans and polo shirt to Mitchell and commanded his son to change clothes. Mitchell took the clothes and tore off to the bathroom. I looked at John, so completely satisfied that we had worked together as a team. Downstairs a small crowd was gathering of aunts, uncles and cousins, waiting to see the madness unfold. , Samuel, John and I waited for Mitchell at the bottom of the steps like he was a bride preparing to make a grand entrance. And when he finally emerged, he was wearing the striped polo shirt. Yes, he was wearing the striped polo shirt . . . with his royal blue sweatpants.

I groaned. We had lost the war. John steadied me at the elbow and whispered, “We will just put him in the back. No one will see the pants.” We had only been married for a month so I wasn’t in the mood to argue with him. So I smiled, and took a deep breath. Yes, I concluded, it was enough that Mitchell relented on the shirt. What difference does it make?

So we all trekked out to my grandmother’s picturesque back yard and sat down on the stone steps, while my mom tried to get the kids to all look in the same direction while she took the pictures. And you almost can’t tell . . . unless you look really closely. But even when I do, I have to smile at those Christmas sweatpants. I have to smile at the kid who got in trouble in class for humming the Jeopardy theme song during an awkward silence in the teacher’s lecture. I have to smile at the kid who doesn’t understand why I get aggravated at him for cutting his toenails all over the sofa, or hoarding canned food in the woods behind our house . . . or shaving a wooden walking stick on his bed . . . or for carrying a machete through the neighborhood. Oh, Mitchell! What an awesome kid you are. Thanks for keeping me grounded. 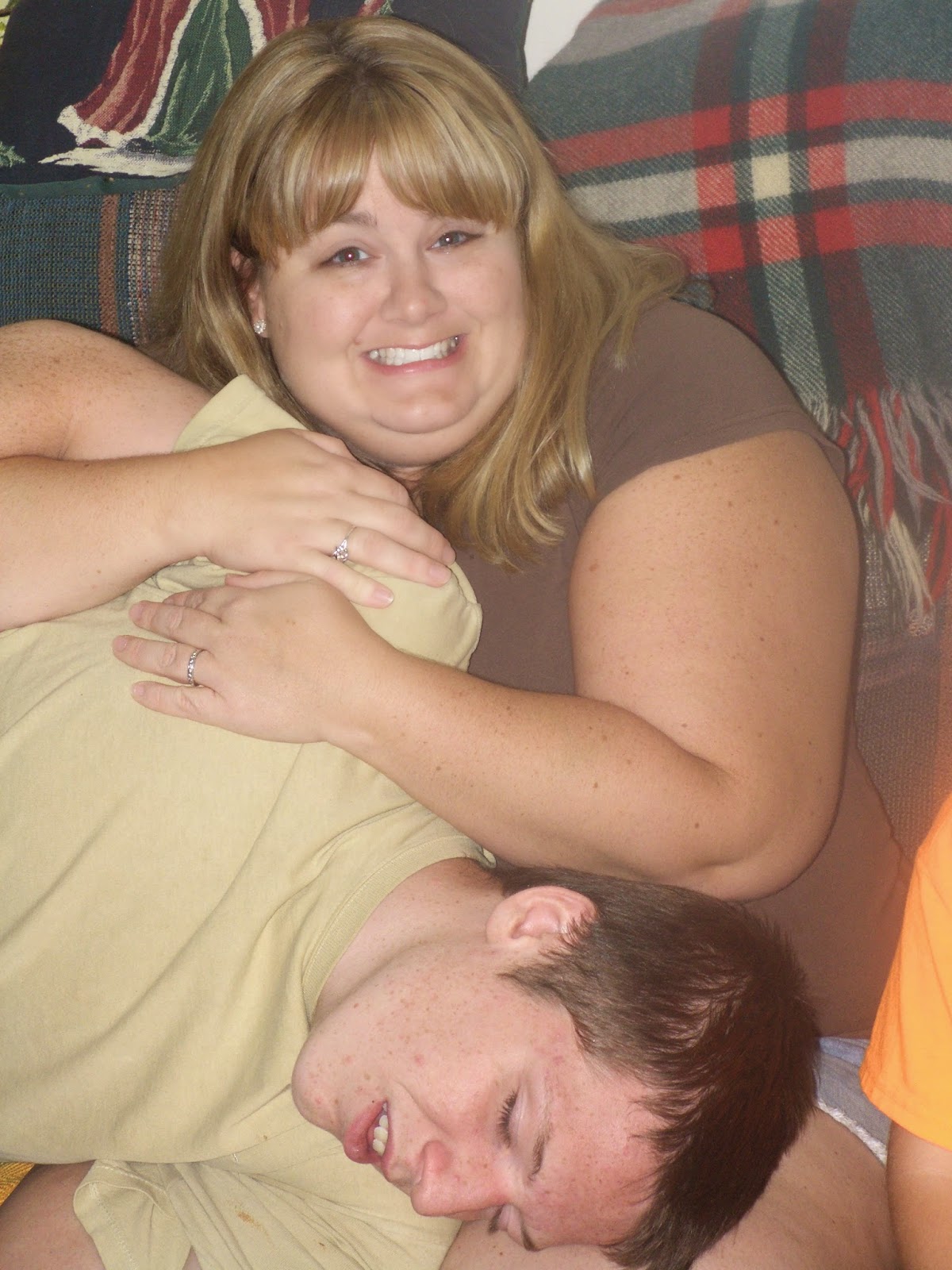 Posted by Melissa Line at 9:56 AM No comments: