Today we got up an hour earlier than normal. I had a goodie bag packed and spent some extra time on my hair. We had to wake up the little ones, except for Lizzie who heard the commotion in the kitchen while I was putting an ice pack and some cheese sticks into a little Life South cooler. Today was the next step in our journey- a placement hearing, or to some: a judicial review. Today was the day when the juvenile court judge would take a look at where the kids are now, where they have been, and what progress has been made towards a permanent home for them.
You all know that we want to be the permanent home for them. That is why we got involved in this after all. Yes, there was a time when I could parent children and then "give them back," watching them reunite with parents, sometimes with great unknowns ahead. That was mostly during my twenties when I figured I had plenty of time to plan and have my own family- my own children.
About ten years, a broken marriage, an ectopic pregnancy, a new exciting marriage, three stepchildren, another ectopic pregnancy, five reproductive procedures, and a lot of heartache and loss later, I realized that I just couldn't keep "giving them back" to an unknown future. Maybe its the control freak in me, but I wanted my OWN children, to cherish, nurture, love, raise, and enjoy. And I have to honestly say that March 27 was a day that changed my life.

But not long after our new little ones were with us, my mom was here helping me get settled with the "babies" and she uncovered a file of information about their biological family and the facts of the case. She found this in a black nylon backpack with old chewing gum stuck in the top velcro. She read through it that evening and gave me the Cliff's notes version over coffee the next morning while I rushed around trying to keep up with a girl who eats dog food, and two boys who were constantly banging into walls and pulling down the curtains in my living room. I didn't give much time to the matters of that black nylon bag, I assumed these children had been placed with us because there was no hope of them going back to their natural parents. Over the next few days and through a series of phone calls and emails with important people, we learned that our case was far from neat and simple. Our case was in fact the very thing I hate the most: headed straight into the great unknown.

I have poured my heart out through this blog many times, so this will not be new information: I have a very intense, daily, unrelenting struggle with letting go. Back in my active al-anon days, I recited the phrase over and over: Let go and Let God.  Someone I worked with had a refrigerator magnet with the phrase written in delicate cursive: Let go and Let God. It sounds good, doesn't it?

But when the visits with birth family started, and the kids were bounced back and forth across three counties to visit with people they didn't have a bond or connection to, it was hard for me to "let go." Even the transfer of the three car seats into the waiting vehicle of the transporter was painful. I planned my daily schedule around the visits so I would be occupied while the kids were not in my care. It absolutely infuriated me that "my kids" were at McDonalds or the outlet mall with someone else, possibly calling them "Mom" or "Dad", all the while I was gnawing my fingernails in a failed attempt to let go.


They have become my sunshine in a way that I cannot put into words. . .

I never thought I could take care of a baby girl because I'm terrible at styling hair. One day last week I realized that I can style Lizzie's hair. I can style her hair because, unlike my playmates growing up, or even my cornsilk cabbage patch kid dolls with their shiny perfect hair, I know everything about Lizzie's head. I have memorized her scalp, the way her hair parts from the back, slightly to the left, behind her eye, and how it grows forward like thick bangs around her sweet forehead. I have memorized her hairline, just like I have memorized the freckles and tiny scars on big C's legs, the birthmark on his forehead and the small of his back, and like I have memorized the sound of little C's footsteps and the pounding of his heartbeat as it thumps against my own, or the sparkle in his eyes: the way I can look into his face and tell if he is anxious or worried.

Which brings me back to my original reason for this story: Little C- the middle child. He carries his anxiety and nervousness in his belly. He came to us with chronic headaches, diarrhea, and weight loss. His weight had dropped from 32 to 29 to 28 and his 2T clothes hung off his body. We persisted in having him evaluated by specialists. They ran some tests, they ordered some blood-work, I - not they - collected a lot of very unpleasant samples. Most all the specialists agreed: these physical symptoms are a manifestation of the chaos and commotion in this little boys' life. After months of these symptoms (the records indicate the diarrhea started in January of this year) little C's symptoms began to fade away. We took great strides with his diet and gave him probiotics, and plenty of attention, but I know that's not the reason little C's tummy troubles got better. At his last physical he was up to 34 pounds when he was down to 28 in April. The photos of his first day with us stand in contrast to the ones we have of this week. He is a glowing, happy, healthy preschooler. And everyone in court today agreed- he looks like a different child.

So it makes me very sad to say that as we walked up to the courthouse steps, little C was holding hands with his CASA worker and said: "Where is Daddy?" His CASA worker pointed to John and said "he's right there," to which little C replied, "where is the other daddy?" And it occurred to me that in four months little C has never asked about the other daddy. But arriving at the courthouse with its intimidating metal detectors, the proud flags waving in the sky overhead, and the endless stream of adults rushing in and out, he was reminded of the daddy from before. The daddy he only saw in this courthouse. The daddy who made promises he couldn't keep- the daddy who kept showing up in shackles and handcuffs.

We were greeted at the elevator by an armed deputy who escorted us to a private play area. It was just John and me, and our three babies. Several important court people came into the room one or two at a time to chat with us, and once or twice they asked me to step out in order to keep the kids from knowing what was happening. After about thirty minutes, little C began to fuss and act up. "I need to go poopie!" he cried, and I rushed him off to the men's room. In the bathroom I realized his stomach was upset. John took him the next two times to the bathroom to "go poopie." The longer we stayed at the courthouse, the more out of character little C became. He was nervous, loud, whiny and demanding. Lizzie didn't much know what was happening. Big C was strangely calm. But little C, my poor little guy- he was just a wreck all morning.

It was a relief when all the big decisions were made for today. The judge had read my report, and the recommendations from CASA and DFACS. The attorneys announced their plans to file for termination of parental rights. My head was spinning and my own guts felt twisted each time the door of that playroom opened and someone else came in to inform me of what was going on. The birth family requested to see the kids today and the decision was made not to allow that. We were relieved. And by 11:20. another armed deputy arrived outside the playroom to escort us out of the building. We stopped for some lunch when we got out of town, and about twenty minutes later, with his tummy full of lunch, little C fell asleep in his car seat. One minute he was looking out the window, maybe watching some fuzzy memories or faintly familiar places roll past the car, and the next minute he was peacefully resting, safe and sound. 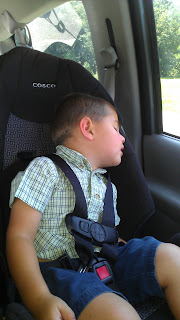 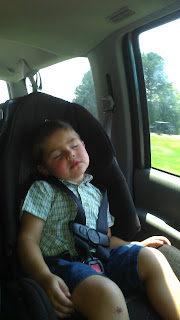 Thank you, God for today, for big decisions and for little ones. Dear God, please don't take my sunshine away.
Posted by Melissa Line at 8:38 PM 2 comments: