When the little ones first came to us, was the angriest child I had ever met. He had been taken away from the chaos and instability that he thought was normal. He had been made to feel like a little adult – the spokesman for himself and two younger siblings. I imagine he was told all the time that he had to be a big boy and set a good example for the babies. He had witnessed a lot of domestic violence, and he had watched helplessly as the adults who were supposed to take care of him were systematically carted off to jail or prison, one at a time.

Teaching a child that they can trust you is quite an undertaking. wanted very much to hate us. He wanted to fear us. He wanted to scare us away. It was the way he had learned to survive. In order to protect himself, he pushed people away who wanted to love him and take care of him. At five years old and forty-five pounds, was like a raging Napoleon – a short little fellow ordering everyone around, shouting profanity at every turn, shocking us all in our “almost normal” life.  In the car, the two little ones would bob and dance to the music on the radio. Not my . The little ones would squeal over a helicopter or a balloon in the sky. Not my . Even silent Cole would pick a dandelion and bring it to me with pride. Not my . His resolve was stronger than I had ever known for such a little boy.

During his first week with us, screamed from the bed so long and so loudly that our family felt the effects all day long. While my mom was here, she helped me with the eight hundred appointments and the insanity of the daily schedule with three small children (in addition to the three teens that were here first!) During her stay, crawled up into my lap, completely exhausted, and fell asleep against me. It was a small thing, but it was a step in the right direction. The vast, empty chasm in his heart was not bottomless. There was trust. There was hope. There was a light at the end of the tunnel. Mom watched him sleeping and from across the living room she mouthed the words “That’s major,” with a nod in my new son’s direction.

But while awake, swung punches, shouted accusations, screamed out in terror, and demanded to have things his way. He bossed me and John, told us all what to do and where to go, and insisted that his way was gospel. Over and over, we repeated the phrase “You are not in charge. Mommy and Daddy are in charge.” We said it so often that even little baby Lizzie picked it up. At eighteen months she would shake her chubby little finger in the direction of anyone that crossed her path and garble “Ma-eee, Daa-eee in targe!!”

After many months of appointments, assessments, therapy, and specialized services, had an official diagnosis – RAD. If you are not familiar with Reactive Attachment Disorder, let me assure you that this disorder is not getting rave reviews. It is associated with early trauma, often in post-institutionalized children, orphans, or kids who have languished in the foster care system and have not formed appropriate connections with safe and appropriate adults. RAD kids don’t know how to let a grown up meet their needs, because for most of their early years, no one was putting them first.
’s second diagnosis is more familiar to most people- ADHD. And we all know what that means. The combination of these seven letters spells an angry, loud, impulsive, wiggly, squirmy, manipulative, and often dangerous little punk.

Aside from therapy, one of our additional plans for was to put him into a team sports program as quickly as possible. It was basketball season that came around first, and we signed up with our last name (even though the adoption didn't happen for another year) he was five and couldn't read, so we weren't too worried. The first week of practice was a disaster. John came home irritated that wouldn't even go out on the court to play with the other kids. He was still so protective of his little heart, he rarely played with other kids or made friends.

The second week of practice, I explained to Camden that if he didn't want to play, we should donate his spot to another child in our community- maybe one who couldn't afford to play. He decided that no one else was going to have his spot, and he took to the court. I watched from the creaky old wooden bleachers at Park and Rec. as ran down the basketball court, dribbling and shooting and defending the ball. I was speechless- and so were his coaches, who knew a little of his history. became one of the strongest players on his team, and in his free time, showed us that he was capable of playing basically any sport.

In soccer the next Spring and in a second season of Basketball, was nominated “best defensive player.” It was not ironic to me that a child who had always put up a wall around his heart, and who defended himself fiercely, was voted best defensive player. was a star in every game. He wasn't always the top scoring player, but he fought hard to defend his team. I sat on the sidelines, feeling pride like none I’d ever known. After every practice, without fail, the coaches would gush about Camden's athletic abilities, and ask us how long he had been playing!

And another sport- football, became the glue that brought together with his new dad, John. desperately wanted to impress John from the start, and would sit for hours and watch the Steelers play. Imagine that- a little boy with ADHD and RAD, sitting still for hours just to bond with his new daddy. And John used the time to teach about the game – the rules, the different positions, and the calls. soon knew more about football than many people my age. He memorized players names, stats, and soon had inside jokes with John. Once I heard him referring to the team as the “Cowgirls” with a sly grin and a nod to John, who approved. Through their shared bond, they took to the backyard on a daily basis, passing the football back and forth for hours after school. The time with his new dad was so good for that it almost seemed to be better than therapy or medicine. 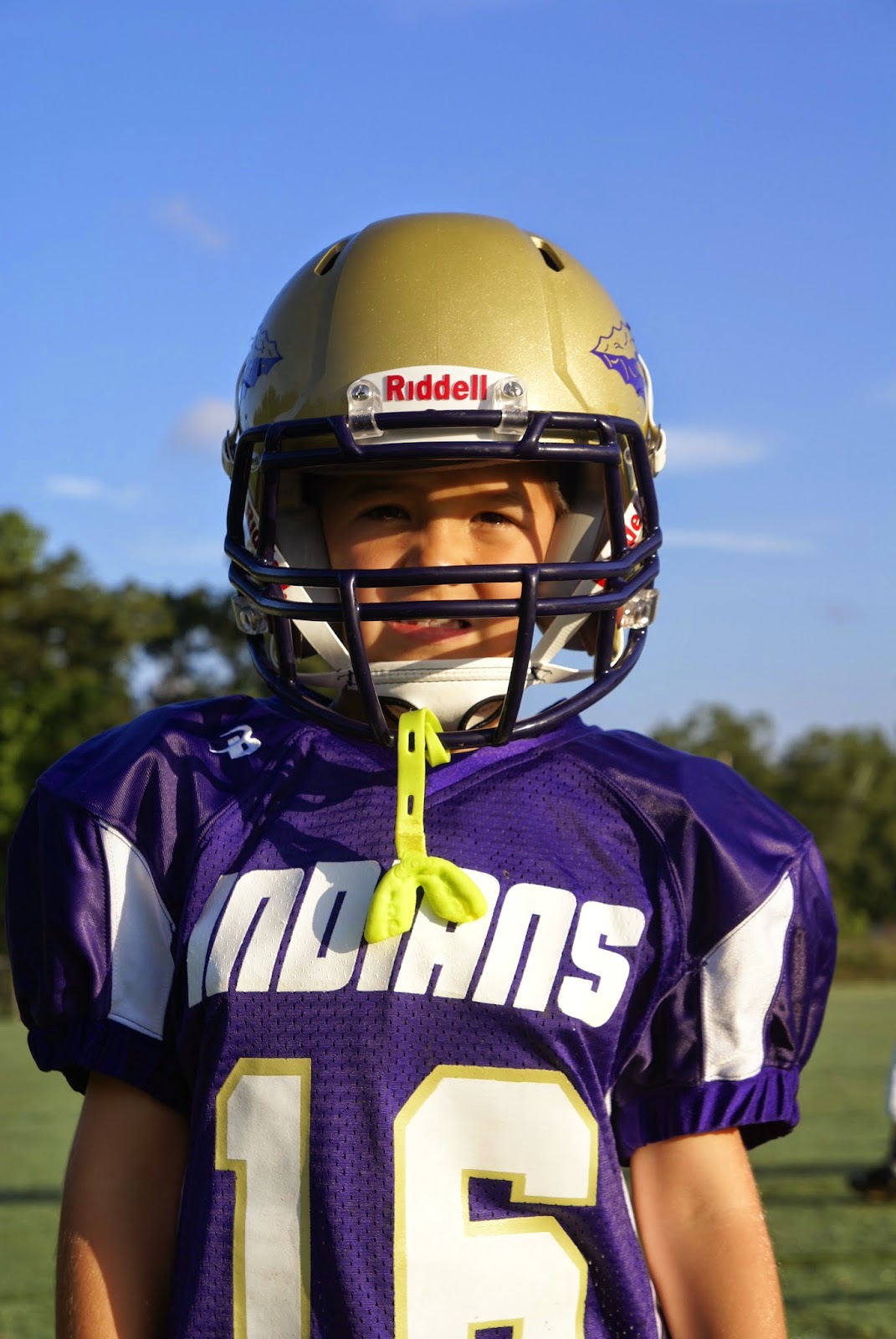 So even though I missed the cutoff to sign him up to play 6 and under football, I did not miss it this year. And as he did in soccer and basketball, has continued to amaze me in 7 and under football. He is part of a team, rough-housing with other boys, rolling in the dirt and grass, putting little stickers on his helmet for each tackle and touchdown. And if that wasn't enough, ’s team is awesome. They have won every game so far and right now have the best record in the league. They are certainly headed to the playoffs, and I feel like the happiest mom in the world. I am so happy to see the joy in this little boy’s eyes when he asks me if we can stay a few minutes after practice so he can throw the ball a little longer with his teammates. “I love you, Mommy!” he shouts as he runs back to this little gang of seven year-olds. I am so proud of my son. And even when practice is hard, hot, long and he falls down or twists his arm and cries for a few minutes, he soon gets back up, brushes himself off and joins the team.

Tonight after practice, ’s coach gave the boys a little final wrap-up and commended them on another win last weekend. He talked about how this team is the only “Undefeated” team in the league. The boys listened intently, still giddy about their new helmet stickers. When practice was over, the snacks passed out, and the Park staff had run all the kids off the field, ran over to my car happily and jumped in the backseat. He patted his helmet and smiled, “That was fun!” he said. As I backed out of the parking lot, I asked “How does it feel to be undefeated?” “It feels good!” he said.

And I realized that being undefeated is about more than sports. My kid has every excuse, every reason in the world to wither away from relationships, to quit trying to trust, to stop trying to make friends. He has every reason in the world to feel defeated- he was abused, neglected, never treated as a priority. He thought that life was always going to beat him down, kick him and leave him on the ground. But my kid will not be defeated. He has gotten up, brushed himself off, and kept fighting. And I believe that one day when he is a healthy, successful young man, I will ask him again, “How does it feel to be undefeated?”